All images © The Electric Pencil, shared with permission

Harris Diamant knew he discovered an important piece of outsider art when he came across a hand-bound book of drawings for sale on Ebay in 2006. Listed by a bookseller in Lawrence, Kansas, the collection was comprised of 238 crayon and colored pencil illustrations on ledger paper by a then-anonymous author and was sold to a collector minutes after being posted. Diamant reached out to the buyer to share his contact information in case the person decided to sell the work. Soon enough, he purchased the entirety of the cardboard, cloth, and leather-bound book that held a hefty five-figure price tag.

The series is titled Ectlectrc Pencil—a misspelled version of Electric Pencil—and features lightly-pigmented drawings from a patient at Missouri State Hospital No. 3, a moniker that often tops the pages. On the cover, a thin-lipped woman with coiffed hair holds up a bouquet of flowers. Other pages include a brown lion with a bird swooping overhead carrying a banner saying “Cat Rag,” while another depicts a rocky gorge with a train running above it. The portraits throughout the work are detailed similarly: most people have large eyes and are dressed in clothes indicative of the early 20th century. Each page is numbered in the top corner.

After multiple unsuccessful attempts to sell the entire collection, Diamant brought the drawings to the 2011 Outsider Art Fair in New York, where the project garnered attention from The New Yorker, The New York Times, and Art on Paper. Firmly planted within the tradition of outsider art, the Electric Pencil project somewhat resembles the work of Henry Darger, the American writer and artist who worked as a Chicago hospital custodian while creating hundreds of drawings and watercolor paintings that were discovered after his death. His pieces now sell for hundreds of thousands of dollars. 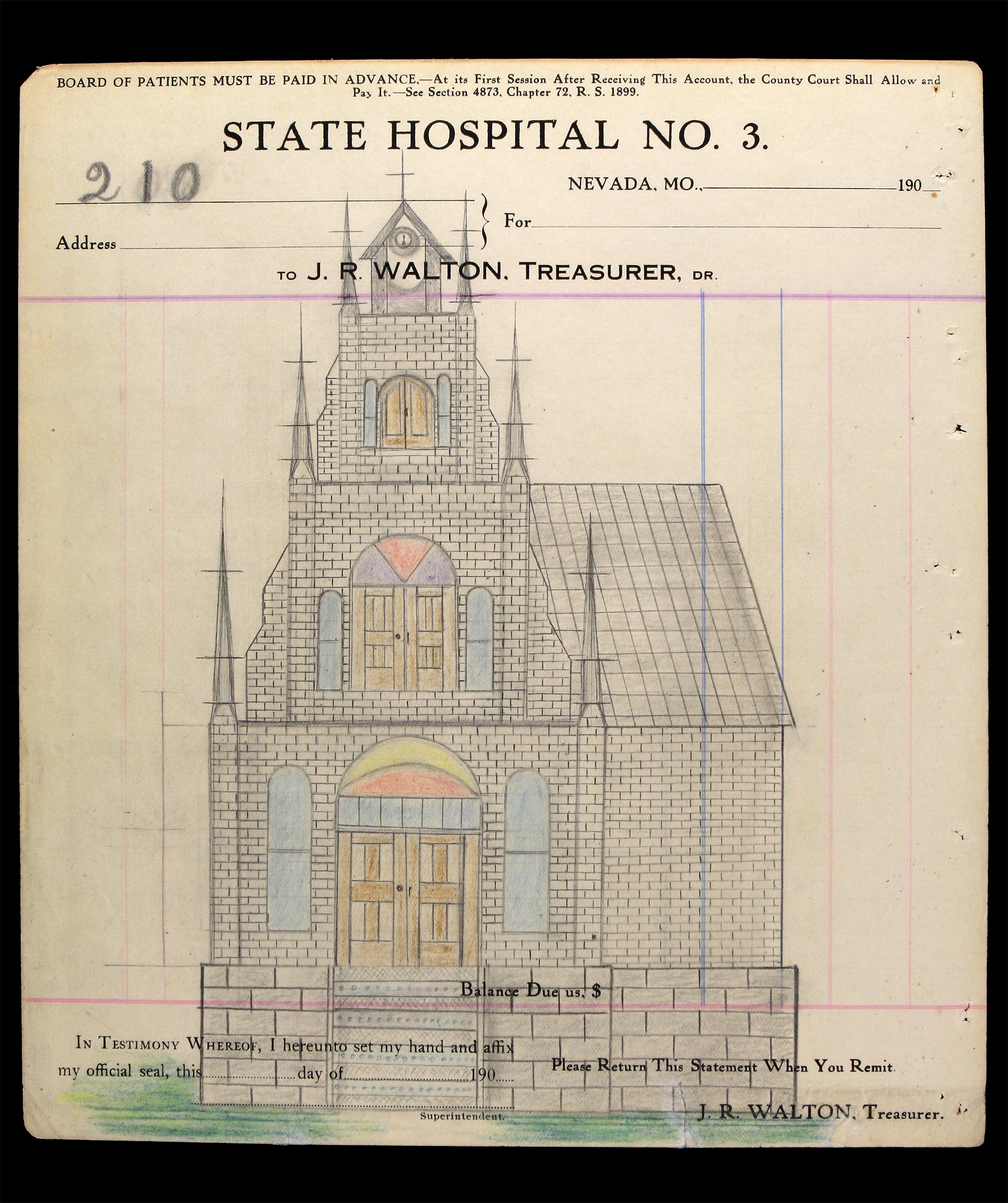 As talk about the unknown artist’s identity grew⁠—Diamant even hired a private investigator to look into the project⁠—so did interest in the collection. According to a 2012 report in Riverfront Times, a 52-year-old woman soon contacted Diamant about the artifact. She was the niece of James Edwards Deeds Jr., the collection’s creator.

Born in the Panama Canal Zone in 1908, Deeds frequently was abused and mistreated by his father. When he was four years old, the family moved to McCracken, Missouri, where they ran a successful farm. By age 25, Deeds’s parents sent him to the Marshall School for the Feeble Minded, an outmoded component of a system that sequestered people with a range of educational and social capabilities. Three years later, he was committed to the state hospital in Nevada for the rest of his life. Housing more than 2,000 patients at its greatest capacity in 1950, the state hospital was situated on 500 acres and was an active farm that patients worked throughout their stays. In a conversation with Colossal, Diamant mentioned that four pages in the book, including the cover and title of the project, refer to ECT or electroconvulsive therapy, a procedure that sends small electric currents through the brain in order to cause a seizure, which alters the brain chemistry and can aid in mental illness. The frequent mention of the therapy points to the effect it had on Deeds as he underwent standard treatment from doctors at the time.

Reports printed in Riverfront Times from the state hospital described Deeds as “psychotic, disturbed, boisterous and delusional.” Doctors diagnosed him officially with schizophrenia.

On the ward, he is hilarious, sings and runs around on the hall…Worked for the state of Arkansas for a man he did not know. States he only committed one crime and that was murder, and did not think that amounted to very much. Said they told him at home he was crazy, but he does not think so, but his mind is not quite right since he got hit on the head with a stick. He is in no way depressed, is much pleased at being here, says he is worth twenty or thirty million dollars. He states that he is most popular with the girls, that they are all running after him. When asked how (illegible notation) he states that he was just born that way.

While committed to the institution, Deeds crafted scenes of circuses replete with animals and performers, in addition to what seem to be depictions of the expansive hospital. Page 33 even features a yellow-eyed man sporting a top hat called “Why Doctor,” perhaps an indication of how Deeds’ understood those who oversaw his care. Diamant also noted that the cover and many of the inside pages show signs of wear, signaling that Deeds carried his prized project with him often. As his most valued possession, Deeds gifted his illustrated works to his mother to protect them from getting ruined or thrown away, but of course, that plan didn’t work out as he intended. Lost for years, a 14-year-old boy found the collection in the trash in 1970 at the Springfield town dump, and it was then passed through various hands until Diamant purchased it.

He’s been digging deeper into the story since, trying to uncover and share information about Deeds’s life and the creativity the artist fostered while confined to a life inside Missouri State Hospital No. 3. For deeper insight into the Deeds’s life and his illustrated project, grab a copy of The Drawings of the Electric Pencil. A Seamstress’s Autobiographical Text Embroidered Onto Her 19th-Century Straitjacket